President Trump at the White House on Friday with administration officials and auto industry executives.

President Trump on Friday directed his administration to negotiate with California over a proposed rollback of fuel economy and tailpipe emissions standards, a move that could avert a damaging court battle with the potential to sow chaos in the auto industry.

California has vowed to disregard any rollbacks and stick to its own stricter emissions standards. Nonetheless, the state must be invited to the negotiating table as the administration moves forward with its plan to relax the fuel economy rules, Mr. Trump said at a White House meeting between top administration officials and major auto executives, according to three people briefed on the closed-door discussions.

Mr. Trump’s directive at the meeting grants a reprieve to automakers, who lobbied for a relaxation of rules aimed at cutting tailpipe emissions of carbon dioxide — a major contributor to global warming — but in recent weeks became increasingly nervous that the zealousness of the proposed rollbacks would provoke a battle with California.

It remains unclear whether administration officials and California can hope to reach a compromise.

The sides are far apart, and, given previous statements by Scott Pruitt, the Environmental Protection Agency head, it was unclear whether any negotiations would be “a good-faith engagement or for show,” said David Friedman, who served as acting administrator of the National Highway Traffic Safety Administration under President Barack Obama.

Mr. Pruitt has argued that California — which has the authority under the Clean Air Act to write its own air pollution rules — should not be allowed to set standards for the rest of the country, and a leaked draft proposal lays out a legal challenge against the state.

A senior administration official said at least one auto executive suggested to Mr. Trump and his team that the federal government had tools at its disposal to maximize its leverage in those negotiations, including the flow of federal funding to the state, approval of California’s next request for an emissions waiver and possible legal action against the state.

California has already sued the Trump administration over the proposed rollbacks and is threatening fresh legal action should Washington insist that the state fall into line.

Automakers hope to head off a wider legal battle, which could plunge the American auto industry into regulatory chaos, with California and 12 other states that follow its lead imposing a stricter set of fuel economy rules than the rest of the country.

“This is a case of be careful what you wish for,” said Jeremy Acevedo, manager of industry analysis at Edmunds, the auto research company. “At the start, it seemed like a great win for automakers. But California’s really digging in their heels.”

“They’re now trying to navigate that relationship, which made this meeting so seminal,” Mr. Acevedo said.

Conservative voices close to the administration, however, are continuing to urge Mr. Trump to take a more forceful approach.

“I hope that the president realizes that there really is no way to do a deal with California,” said Myron Ebell, who directs environmental and energy policy at the Competitive Enterprise Institute and led the E.P.A. transition team. “As long as they’re part of this, they’re going to drive the process.” 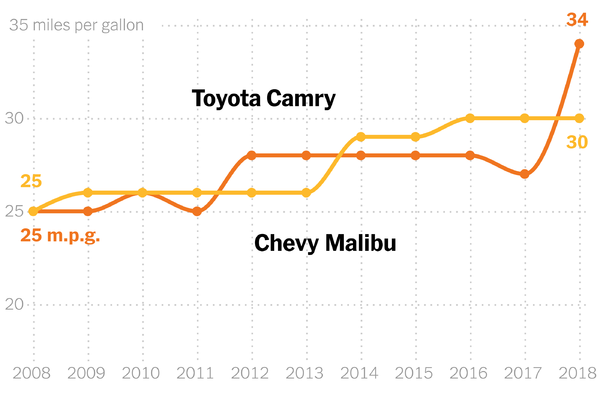 It’s Not Just Hybrids: Pickup Trucks and Sedans Have Gotten More Efficient, Too

As the E.P.A. proposes rolling back fuel economy standards, here’s a look at how automakers have made their cars more efficient so far.

Mr. Trump has previously pushed for an aggressive rollback, saying last March that the Obama-era rules “would have destroyed, or further destroyed, the auto industry.” In exchange for action in reducing regulatory burdens, he had demanded that automakers open new plants and import fewer cars from outside the country — a demand he reiterated on Friday.

“We’re really talking about environmental control,” he told reporters at the start of the meeting, “and manufacturing of millions of more cars within the United States.”

At stake are standards that would have required new cars and trucks to average more than 50 miles per gallon by 2025. Adopted in 2012, the rules would have cut oil consumption by about 12 billion barrels over the lifetime of all the vehicles affected by the regulations and reduced carbon dioxide pollution by about six billion tons.

The leaked draft of the administration’s proposals, which were compiled by the Department of Transportation and the Environmental Protection Agency, called for freezing fuel economy standards completely after 2020.

Any proposal to revise the rules must still be reviewed by the White House’s Office of Management and Budget and published in the federal register, then undergo a public comment period and may undergo further changes before being finalized.

The heads of two of the auto industry’s largest lobbying groups, Mitch Bainwol of the Auto Alliance and John Bozzella of Global Automakers, issued a joint statement after the meeting.

“We thank President Trump for inviting us to the White House to discuss the automotive sector,” they said. “We also appreciate the President’s openness to a discussion with California on an expedited basis.”

In Alaska, a Deal Is Made for a Controversial Road Inside a Refuge

How Scott Pruitt Plans to Defend Himself on Capitol Hill: Spread the Blame