After a long night of waiting for results, Kansas gubernatorial candidate Kris Kobach told supporters the election was too close to call early Wednesday.

Alarmed by the tight race for a congressional seat in Ohio, Republicans are steeling for a 90-day campaign of trench warfare as they fight to keep control of the House, pinning their hopes on well-funded outside groups and a slashing negative message about Democrats.

Voting across the Midwest and West laid bare the party’s precarious situation on Wednesday: Ohio’s special election exposed deep vulnerabilities in the historically conservative suburbs of Columbus, and the Republican candidate there held a slim lead over his Democratic challenger.

In Kansas, a nomination fight for governor also remained too close to call the day after the primary, with a hard-right candidate threatening to topple the state’s Republican incumbent and splinter the party down ballot.

And in primaries from suburban Detroit to Seattle, Democrats selected hard-charging candidates in districts long held by the Republican Party.

Republicans say they can keep a thin grip on the House by propping up incumbent lawmakers in red-tinged districts and branding the Democrats as wildly left-wing. But senior party strategists have concluded that over a dozen districts held by Republicans may already be unwinnable, most in metropolitan areas where President Trump has alienated moderates and stirred volcanic resistance on the left.

“Every white, suburban district in the country will be a swing district in November, that’s the takeaway” from the Ohio election, said Representative Carlos Curbelo, a Florida Republican who is being targeted by Democrats.

The Republicans can afford to lose only 22 seats over all to maintain even a one-seat majority. That leaves them with little room for error over the remaining three months of the campaign. 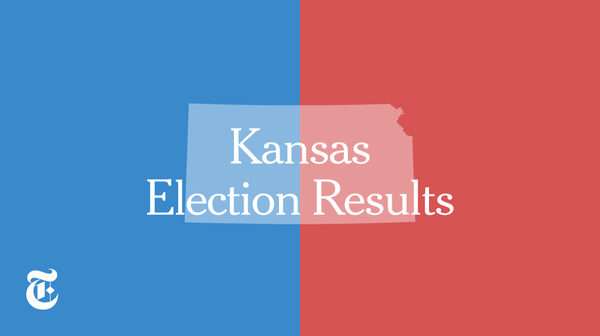 See full results and maps from the Kansas primaries.

Veteran party lawmakers have an increasingly bleak view of their prospects in the House, and some fear that Democrats could seize the chamber by a solid margin.

“There’s a real likelihood that they not only win the House, but they win it by 10 or 12 more seats than they need,” said Senator Lindsey Graham of South Carolina, voicing publicly what many Republican officials have begun to acknowledge privately this summer.

Mr. Graham said a Democratic takeover was no sure thing, noting that “in the era of Trump, things can change in 24 hours, for good or bad.” But he said any Republican in a remotely competitive district could face a difficult general election. “We’re bleeding among women and the enthusiasm factor for Democrats is worth 7 or 8 points, and sometimes more,” he said, using political jargon to describe just how deep into Republican territory the battlefield might stretch.

“If I was a House guy in an R+10 or less seat I’d be getting on the phone and raising money and putting a sign on my dog.”

In Kansas, Republicans faced uncertainty Wednesday not only about their candidate for governor this fall, but also whether they were creating a political opportunity for Democrats to win the office in November. Should the party ultimately nominate Kris W. Kobach, its hard-right candidate for governor, it could also undermine Republicans in congressional races down ballot.

With all Kansas precincts reporting Wednesday morning, Mr. Kobach, the secretary of state, was ahead of Gov. Jeff Colyer by just 191 votes out of more than 311,000 Republican ballots cast. The results were likely to remain in flux for at least several days.

And in another race where Republicans could be vulnerable in November, Sharice Davids, a lawyer who is Native American, won the Democratic congressional primary on Wednesday in a swing district that surrounds Kansas City. She will face Representative Kevin Yoder in November. It is one of two Republican-held districts in the state, along with a more rural open seat next door, where Democrats are threatening to shave down the House majority.

In Ohio, the Republican candidate for Congress, Troy Balderson, was ahead by 1,754 votes out of more than 202,000 ballots cast — a lead of nearly 1 percentage point. But 3,435 provisional ballots have yet to be counted. Ohio law provides for an automatic recount if the two candidates are ultimately separated by less than half a percentage point.

The Democratic candidate in Ohio, Danny O’Connor, has not conceded the race — he called it “a tied ballgame” on Tuesday night — and is set to face Mr. Balderson again in the November general election.

Illustrating the aggressive approach the Republican Party is taking to reinforcing its candidates in conservative-leaning districts, the Congressional Leadership Fund, the principal “super PAC” dedicated to House Republicans, has already begun airing attack ads against Democratic challengers in three traditionally red seats in Kansas, Kentucky and upstate New York. Mr. Trump carried all three districts in 2016 but Democrats are pursuing all of them ferociously.

Corry Bliss, the group’s chief strategist, said Republicans needed to wage a national campaign to disqualify Democrats as a political alternative in the eyes of voters.

“This is a tough environment and we have to give voters a choice in November,” Mr. Bliss said. “One party has cut your taxes and helped create the best economy in decades. The other party says: ‘We will raise taxes, we will abolish ICE and we will put Nancy Pelosi in charge of it all.’”

But Mr. Bliss also sent a stern message to lawmakers in his own party who may not be bracing adequately for a fall onslaught by Democrats. The Congressional Leadership Fund spent millions of dollars in Ohio to salvage the campaign of Mr. Balderson.

While Republicans are expected to hold a financial advantage in the fall campaign over all, the party is unlikely to be able to fund similarly expensive rescue missions in dozens of vulnerable districts — many of which have more forbidding demographics than the Ohio seat.

“We have to have members who raise money, run good campaigns and provide a good contrast for November,” Mr. Bliss warned.

What alarms Congressional Republicans, though, is what is out of their hands — not just Mr. Trump’s conduct but also some of the controversial candidates leading their tickets. In addition to Kansas, should Mr. Kobach prevail, House Republicans are burdened with unpopular standard-bearers in Illinois (Gov. Bruce Rauner) and Virginia (a Senate candidate, Corey Stewart) who together could drag down at least a half-dozen lawmakers.

A full list of elections for the House and Senate, including which races matter most for congressional control.

In the Ohio race, some former Republican loyalists defected to Mr. O’Connor while other right-of-center voters may simply have stayed home, producing a close outcome in a lopsidedly Republican area. Mr. Balderson may have prevailed because just enough conservative voters remain satisfied enough with Mr. Trump.

“I wish he would quit tweeting at night, but I think he has made a lot of changes that people voted for him to do,” said David Haid, 70, who operates oil and gas wells in Ohio.

But voters like Mr. Haid are less plentiful in many other suburban districts. And in Ohio, Jennifer Kramer, a small-business owner, gave voice to the unease of women in these areas who have recoiled most sharply from the president.

“I don’t feel things are better now because of the divisiveness,” said Ms. Kramer, 42, blaming Mr. Trump for sowing discord. “You have people who feel they can be more vocal about their hatred. Trump is not the type of leader I respect.”

The Ohio results were not the only ominous signal for Republicans on Tuesday night. The party’s suburban slump showed up in districts far beyond Ohio.

In Washington State, where candidates from all parties compete in nonpartisan open-primary elections, Republican candidates posted limp results in three congressional districts, including an open seat in the Seattle suburbs and the seat in Eastern Washington held by Representative Cathy McMorris Rodgers, a member of the Republicans’ leadership team in the House.

And in a sign that they are already preparing for substantial losses, Republican officials are contemplating political triage, weighing which districts may be beyond hope and determining where money can be saved.

Among the seats that Republicans see slipping out of reach are those held by Representatives Rod Blum of Iowa and Jason Lewis of Minnesota, along with more than half a dozen open seats currently held by Republicans in New Jersey, Florida, Pennsylvania and Arizona.

And after tracking the Ohio election late into the night, bleary-eyed Republicans awoke on Wednesday to the news that Representative Chris Collins of New York, who holds a solid-red district near Buffalo, was facing criminal charges related to financial dealings.

The news may imperil Mr. Collins’s seat, in a development the party can ill afford. More broadly, the specter of one of Mr. Trump’s earliest and most vocal supporters being arrested on insider trading charges may hand Democrats an opportunity to tar the Republican majority as corrupt.

Democrats, for their part, appear increasingly emboldened even in districts tilting well to the right of center. In Ohio alone, three or four other Republican-held seats could be up for grabs in November, if the political dynamics of the moment hold for the next few months.

And Democrats see the same political sluggishness, on the part of a number of Republican incumbents, that has G.O.P. strategists so anxious about the general election.

Ken Harbaugh, a Democrat and former Navy pilot seeking a solidly Republican seat in Northeast Ohio, said voters in his area sensed the disengagement of the sitting lawmaker there, Bob Gibbs, a Republican in his fourth term. Mr. Harbaugh is running on some of the same themes — championing affordable health care and attacking entrenched politicians in Washington — that Mr. O’Connor put at the center of his campaign.

“The story writes itself when you’ve got an incumbent who’s never gotten a bill passed into law, who hasn’t looked his constituents in the eye in years, hasn’t done a real town hall in years,” Mr. Harbaugh said Wednesday morning. “And people are sick and tired of paying someone to do nothing.”

Mr. Harbaugh pointed to the special election as a sign that voters in Ohio are hungry for change and focused on health care most of all. “They are just sick and tired of a political class that isn’t working for them,” he said.

In Los Angeles, a Billionaire Doctor Takes On an Ailing Newspaper